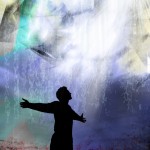 When we seek to find something for ourselves, whether it”s our true path, a thriving client practice, artistic project, or even a life of greater connection, we can often try to do it from a place of pure will. We can try to use our own mental strength, determination, or stamina to force a situation to bend to our desire. But that”s not real power. When we open ourselves enough to be able to tap into something far greater and allow THAT to flow through us, then we can source from true power. But we must have the presence to listen to and act on that divine information and guidance.

Below is an experience I had this summer in Mt. Shasta, CA, that exemplifies this concept of Surrender.

I was hiking with my beloved, Eden, and a couple of new friends, Sarah and Jacob, who were guiding us to see the Sacred spots of the area. As we walked, Sarah was telling me about a special spot in an upcoming creek that was said to hold tremendous powers of cleansing for those who waded in.

Even though it was June, there was still a lot of snow on the mountain. Needless to say, the water in the small river was freezing as it flowed down from the glaciers above.

Sarah showed me this sacred spot where I was meant to submerge myself in the water. As I was removing my shirt, something inside me said, “strip down to your bare ass”. So I did. She then showed me how I was to let go and submerge myself completely under the freezing water.

As I approached the water, I could see this particular blue stone below the surface. Something told me that if I could pass this test, then I would be able to have that blue stone under the water.

Sarah then said, “It”s all about the quality of your condition of surrender.”

On my first attempt of trying to surrender, I entered the water. It was so cold that it was like sharp icicles piercing my skin at every inch. I was only able to submerge about ¾ of my body. I just couldn”t take it. I was still fighting with it. I was trying to enter the water with my pure will.

Sarah then said, “You have to fall in love with it.”

So I pondered that on my next attempt. As I was staring at the water, I was thinking, “What happens when you fall in love?”

I thought of my beloved, Eden, and some ideas came to me. When I fell in love with her, it was a desire. But it was something bigger than just a want. I recalled, how just two weeks into our Der roulette gratis Casino Bonus wird auf verschiedene Weise angeboten. relationship, I wrote a letter to her where I saw and outlined a future with her. This became integral to my thought process. So I then imagined myself as having a future with the water. Seeing that it”s a part of me, I”m a part of it, and how I”d like to develop a greater relationship with the Water element. As I held these thoughts, I entered the water for a second time and I was able to be with it. I was able to tolerate the coldness so that I could submerge my entire body for just a couple of seconds, allowing the water to flow through me. The strength of that water flowed through me and as it did, I realized that something greater than myself was flowing through me. Still, I lasted for only a few seconds.

I wanted to make one more attempt. Before submerging myself for a third time, I sat with my experience and lesson from the rattlesnake (see The Lesson from the Rattlesnake if you missed it) – that of becoming one with whatever I am trying to master. In this case, becoming one with the Water. I held that thought, closed my eyes, and blended my energies with those of the water. As I went in and became one with the water, I could feel the crystalline energy running through me. I was able to be with the experience under the water for a good 15 seconds this time.

The blue stone I was able to wear around my neck after that day was a reminder of my surrender, of the strength that comes when we allow things to flow through us that are greater than ourselves.

For the next month, I wore that blue stone around my neck until after a week long training in Utah.  A friend felt called to gift me a rare, uncut, rose quartz crystal. Something inside me wanted to give her something in return and what immediately occurred to me was the blue stone necklace I had earned. But I paused – I was thinking that I couldn”t possibly give her something so personal and meaningful. But instead of going with my rational mind, I simply listened to my feelings. I slipped the necklace over my head and gave it to her as a gift, briefly telling her the story of how I came in possession of it. As I hugged her afterwards, I realized that the quality of my condition of surrender had just turned into a pure rose quartz crystal.

So for you this day:

Are you trying to force any outcomes?

Are you battling anything, including yourself?

How can you transcend the smallness of your mind to enter the greater flow of WHAT IS?

How can you tap into true power, the universal power that lies in your condition of surrender?

You can have anything you want if you co-create WITH the powers of the Universe.