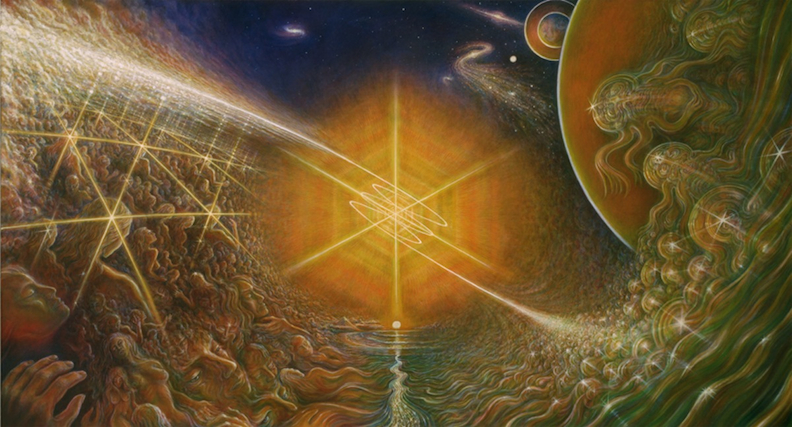 Perhaps you already know about some of your past lives, or feel like one particular star system is “home”. Or, maybe your belief is that you come from Source (God) and return. But what if its all right?

I received the following in a meditation of sorts while we drove out to Sedona late at night. I had been asked by someone that day if I knew “where I came from”, referring to any star lineage or star connection I may have. As John drove along the desert in the pitch dark of night, I was staring up at the twinkling stars asking my Guides to explain where we actually came from and how we got here.

This was what I received.

It put this life on Earth in perspective…

Where do we actually come from?

Each soul that incarnates on earth has a lifestream, which involves multiple steps.

The first step in any soul journey is a separation from Source (God). At this stage you are still very much a part of Source, but are conscious to the immediate separation. Your energy remains one.

As time (but not linear time) progresses you are further developing in free thought, free will, and discernment. Your Love remains as pure as Source, but you are able to feel more independence. This is the second step as the soul begins to realize its own autonomy as separate from the One source energy.

In the next stage of lifestream you choose a planetary system of which to learn from. This is creating the basis of what experiences you seek to have and of what you are going to teach. At this point you are still aware of the greater plan of the universe and all life within existence.

At the next stage of evolution you are further defined into physical form. You choose a form so you can understand the limitations of physical existence. This stage may last many 1000’s of years, but in circular time. As your existence in physical realm continues, there is a lessened direct experience of being One with Source as you become more dense and constrained by living in a lower dimensional realm with physical limitations.

Thus, with physical density comes further separation. But with separation there is beauty in free will, the ability to CHOOSE one’s life path. The purpose of choosing one’s life path is to continually expand the wisdom of the greater Universe. Each incarnation into physical existence allows a greater transmission of love and light. You continue to incarnate in any chosen life for a period of time.

The reason for extended incarnation is to experience love and light through permutation, transcendence, and moments of awakening. They all create sparks in consciousness. Think of it like fuel, but fuel for the greater cosmos. The universe thrives on change and adaptation, a combustion that furthers life. The more Beings in physical form, the greater capacity for dynamic change – so long as those Beings remain in Light.

In the final stages of one’s lifestream we choose a form in which to learn our greatest lessons. Having experienced many star systems, many intelligences, and many ways of Being, a soul becomes ready to live the final aspect of their Lifestream.

It may, however, feel the most separate, but it is only an illusion of separation. Because at this point in one’s lifestream, there are many Guides (light beings) to support you. These are alliances you have spent lifetimes developing for your greatest journey – that is, this final phase we are in now. This final phase does, however, take centuries.

Once you have then learned your greatest lessons you are ready to return home to Source and merge again in to All That Is.

But: you have a choice.

Many choose to stay in separation from Source so they remain in service to those still in physical incarnation (this is the nature of Ascended Masters). This can be within your own planetary system, or others in which you have connected within your earlier lifestream.

When is the Lifestream complete?

In essence it is never complete. But if you choose to merge back in to All That Is you once again become part of the fabric of Eternal Life. Consciousness as you know it dissolves.

You can choose to repeat an entire lifestream again, yet you will have little consciousness of your prior Lifestream. So there becomes consciousness within consciousness. It is an eternal cycle.

Why at this time are there so many people waking up and remembering?

Because you are close to returning home, to being able to choose the final stage. It is imperative, as you come full circle, that you begin to re-integrate the conscious awareness of who you are.

This is why so many people are re-awakening. You are nearing a death cycle that has been born from 1000’s upon 1000’s of years of incarnation, experiences, and momentum. As you complete this cycle, you must re-awaken that aspect of you which remembers your choices, and why you chose what you have.

In all of this, it is important to know that your choices are your own. It goes beyond manifestation of thought, beyond having created your own reality based on lessons, ‘karma’, expectations and belief systems.

If you are near the end of this phase of lifestream, you can now choose to remember as much as you desire so your reintegration becomes complete.

Those who are ready will know. That is why you cannot force a person into awakening. It is all divinely timed, orchestrated by their greater choices. Their lifestream dictates their time for awakening and re-remembering.

Tribes of like-hearted souls are forming now (physical realm) to quicken this re-integration and re-remembering. Many of the first waves of humans are nearing the end of their lifestream, thus the mass awakenings and re-remembering of consciousness that is happening.

A new wave of humanity, however, is also being brought in (born) as well. They are already farther on the evolutionary path, but only because of the lessons those who have come before them have lived by being in the physical existence of duality. It is because of you, as the last wave of physical incarnations, that they have evolved.

It is with gratitude that light beings – angels, guides, ascended masters – are in service to those in physical form, because we have all helped heal the greater Universe by our chosen lifestream.